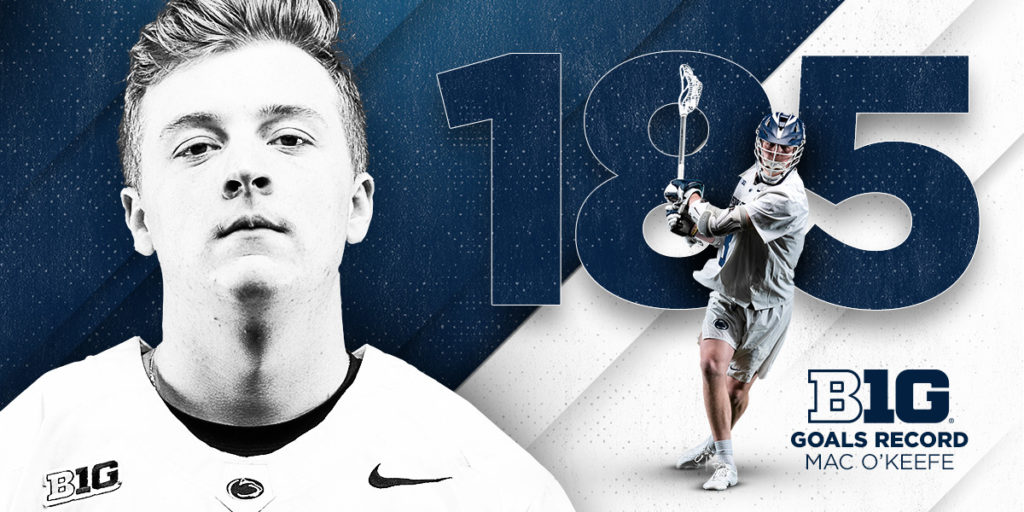 Mac O’Keefe keeps scoring goals and there’s nothing you can do about it. Image courtesy of Penn State Athletics.

Sure, leave Mac O'Keefe wide open in overtime. What's the worst that could happen? https://t.co/ta02OyMoJR

’16 Mac O’Keefe has been terrorizing goalies for four years, and Saturday, he became the conference’s all-time leading goal scorer and celebrated by hammering home the overtime game-winner as Penn State downed Penn, 18-17.

O’Keefe’s third of four goals on the game gave him 185 career markers, which slots him into the top spot in Big Ten history. O’Keefe finished with four goals, one assist, two ground balls and a caused turnover as the Nittany Lions moved to 4-1.

’17 Sean Lulley (Half Hollow Hills East) was brilliant yet again for the Quakers, handing out a whopping six assists to go with two goals, five ground balls and a caused turnover. Three of Lulley’s assists came 3:18 apart in the fourth quarter, including setting up the game-tying goal with 16 seconds to play.

From distance and off the bounce for your first-career goal? We’re here for it 😈

’18 Owen Caputo (Middle Creek, N.C.) continued his breakout sophomore campaign with his third straight hat trick to help Duke topple Richmond in overtime. He then chipped in a goal in the rout of Furman. ’18 Jordan Ginder (Brunswick) won 11 of 19 faceoffs against the Spiders, along with nine ground balls, and added a 7-for-12, six-ground ball effort against the Paladins.

Another D-Middie with his first-career score on Sunday 😈

’19 Jake Caputo (Middle Creek, N.C.) and ’19 Connor Drake (Salisbury, Conn.) each found the back of the net for the first time in their Blue Devil careers against Furman. Both also grabbed a ground ball.

’19 Kenny Brower (Massapequa) had a ground ball against the Spiders and two against the Paladins. ’17 Cameron Mulé (Half Hollow Hills West) found the back of the net against Furman.

’19 Christian Mulé (Half Hollow Hills West) picked up his second hat trick in a row by putting home three goals to go with an assist and two caused turnovers as Lehigh rolled in its Patriot League opener. ’18 Anthony Tangredi (Chaminade) continued to wreak havoc on the back end with four caused turnovers and a ground ball.

’17 Ryan Magnuson (Northport) potted a goal for the Mids.

’16 Ian Laviano (Cold Spring Harbor) helped the ‘Hoos to a pair of non-conference wins with his one-goal, one-assist, one-ground ball day against the Panthers, which he followed up with by bagging a pair of goals to go with three ground balls and a caused turnover against the Falcons.

’17 Matt Tufano (Glenn) put on a show for Saint Joseph’s, bagging a hat trick, setting up another goal and picking up a pair of ground balls in the win.

The Hoyas continued their utter dismantling of anyone who comes into contact with them, thanks in part to ’17 Joe LiCalzi (South Side) leading a stingy defense with a ground ball against the Mount and three more against Bellarmine.

’17 Taylor Strough (Cold Spring Harbor) powered the Stags in a high-scoring affair with his second five-goal outburst of the young season, including his first game-winner of the campaign.

’17 Tommy Lingner (St. Anthony’s) was downright incredible for the Retrievers, tossing aside 17 shots to go with three ground balls as UMBC won its second straight.

The Big Green kept its record intact with their third straight win, thanks in large part to a three-caused turnover, two-ground ball day from ’16 Jack Richardson (Connetquot).

’17 Tom Galgano (Bethpage) continued his ridiculous caused-turnover streak by stripping the ball five times and collecting seven ground balls for the Bearcats. Oh, and he also tossed in his first career goal.

’18 Max Verch (Syosset) dislodged the ball once and added vacuumed up three ground balls, while ’18 Teddy McLoughlin (Islip) and ’17 Kyle Tiernan (Glenn) each pocketed a ground ball for Binghamton, while ’17 Phil Puccio (Garden City) gobbled up a ground ball for the victorious Bison.

Unsurprisingly, ’16 Ryan Tierney (Massapequa) scored a bunch of goals again. Tierney put up a hat trick, an assist, a ground ball and a caused turnover against the Seawolves, then pushed the Pride to a win with a three-goal, four-day, four-ground ball day, complete with a caused turnover.

’16 Riley Forte (Half Hollow Hills West) paired two goals with two assists to go with a ground ball against SBU before adding a ground ball.

’19 James Ringer (Bayport-Blue Point) had an assist for the Scarlet Knights against the Seawolves.

’17 Kevin Mack (Manhasset) shredded the Johnnies for a hat trick and a ground ball.

’16 Justin Lynskey (Massapequa) tagged the Crimson for a hat trick and an assist to go along with a caused turnover and a ground ball. He added a goal and a ground ball against the Black Knights.

’16 Jake Weinman (Bayport-Blue Point) set up a goal and had two ground balls and a caused turnover in the Red Foxes’ win, then later added a hat trick and a ground ball against the Bison.

’18 Sean Kuttin (Chaminade) and ’17 Luke Eschbach (Smithtown East) each caused a turnover and grabbed a ground ball for the Bulldogs, who also got a ground ball from’16 Lucas Cotler (Syosset).

’19 Blake Behlen‘s stat lines remain outrageous. The Commack alum had another monster week for the Rams, putting up five goals, three assists and a caused turnover in the rout of Centenary, then followed it up by burning Sage for three goals, four assists, three caused turnovers and six ground balls.

’16 Tom Martello (Chaminade) potted four goals and snagged a ground ball to pace the Cardinals in their season opener. ’18 Jake Sexton (Chaminade) set up a Martello goal and also scored once to go with three ground balls and a caused turnover.

’17 Rob Ziegler (Sayville) started the season with a bang, causing a pair of turnovers and corralling three ground balls to pace the Hawks’ strong defensive effort.

’17 Jensen Corabi (Half Hollow Hills West) put together a one-goal, one-assist effort as the Jumbos smashed Colby in their season opener.

’18 Matt Sageder (Mount Sinai) was rock-solid in relief in the Cavaliers’ cage, making seven saves and collecting a ground ball as the Cavs rolled.

’18 Sean Baudo (St. Anthony’s) powered the Cardinals’ win with a hat trick – including the game’s first two goals – and an assist to go with a caused turnover. He followed it up with a two-goal, two-assist, one-ground ball day.