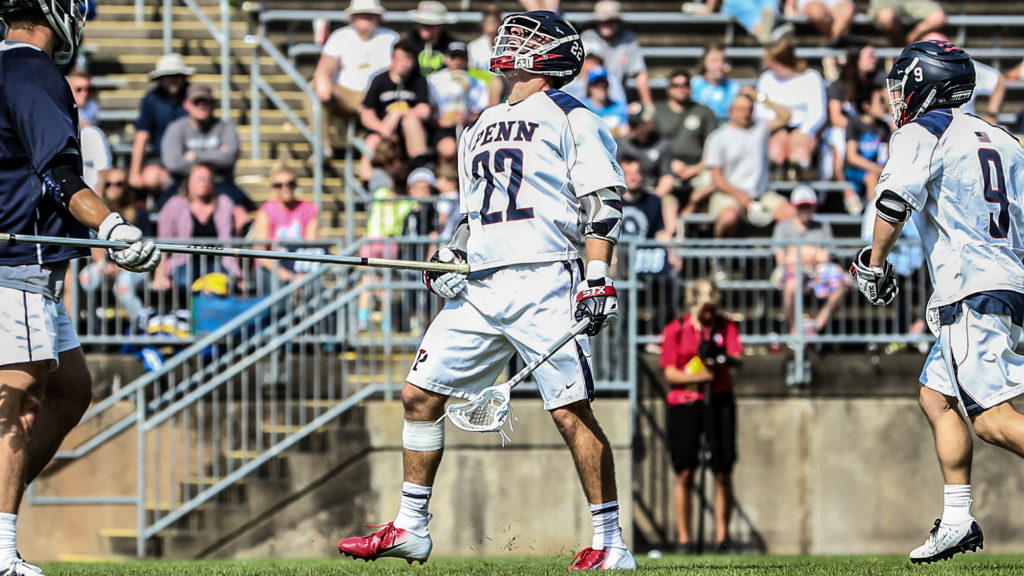 Sean Lulley emphatically made sure that a battle of top 10 teams in the country went Penn‘s way.

The Team 91 2017 alum by way of Half Hollow Hills East tore Duke apart for a career-high six goals and seven points as the defending Ivy League champions topped the Blue Devils, 14-11, Saturday.

’19 Angelo Petrakis (Massapequa) continued his hot start to his Big Red career with a pair of excellent performances, first winning 13 of 17 faceoffs against the Tigers and following it up with a 9-for-12 day in the rout of the Panthers. Petrakis added six and three ground balls, respectively. ’17 Joseph Bartolotto III (Miller Place) combined for four ground balls and a caused turnover.

Dominant on the defensive end and now he’s scoring goals, too. Congratulations to ‘18 Anthony Tangredi (Chaminade) on scoring his first career goal for Lehigh! 🎞: @lehighlacrosse

’19 Christian Mulé (Half Hollow Hills West) was on fire for the Mountain Hawks, torching VMI for a goal, three assists and two ground balls, and then ripped up NJIT for five goals and three ground balls to secure a pair of wins for the Mountain Hawks. Fellow ’19 John Sidorski (East Islip) registered his first two career goals and added an assist and a caused turnover against NJIT after having a ground ball against VMI.

’18 Anthony Tangredi (Chaminade) continued his destruction of opposing offenses with a caused turnover in both games, a ground ball against VMI, and also his first career goal against NJIT. ’18 Michael Monitto (Half Hollow Hills East) recorded a helper against NJIT.

’16 Lucas Cotler (Syosset) netted a goal and added two ground balls and a caused turnover to help the Bulldogs down the No. 1 Nittany Lions. ’17 Luke Eschbach (Smithtown East) contributed two ground balls and a caused turnover in the win, while ’18 Sean Kuttin (Chaminade) also sniped a goal for Yale. ’19 Mikey Alexander (West Islip) caused a turnover in his first college game for the Bulldogs.

’16 Mac O’Keefe (Syosset) was a handful on the ride for Penn State, causing three turnovers, and the sniper also buried a pair of goals to go with three ground balls.

No angle? No problem. 91 ‘16 Jake Weinman (Bayport-Blue Point) has you covered with this filthy BTB! Weinman had a hat trick as Marist hammered previously unbeaten Army today. 🎞: @marist_menslacrosse

’16 Jake Weinman (Bayport-Blue Point) ripped home a hat trick, including the ridiculous behind-the-back shot above, and added a ground ball to guide the Red Foxes to an upset of top-1o Army.

’17 Matt Tufano (Glenn) led the way for an outstanding week for the Hawks as he set up two goals in a win over the previously unbeaten Blue Hens, then also added an assist and two ground balls to help Saint Joseph’s also tag the Friars with their first loss.

’17 Tommy Lingner (St. Anthony’s) was out of this world for the Retrievers, blocking 16 shots to guide UMBC to its first win of the year.

’16 Justin Lynskey (Massapequa) potted a pair of goals to go with a pair of ground balls and a caused turnover as the Crusaders won their second straight.

’18 James Amorosana (Manhasset) had a caused turnover and a ground ball to help the Golden Eagles stymie the Titans’ offense.

GOAL!! Princeton turns it over and Laviano makes them pay with his third goal of the afternoon!! Virginia now trails by just 1, 13-12!! #GoHoos

’17 Ian Laviano (Cold Spring Harbor) paired a hat trick with an assist and also added a pair of ground balls, but the Cavaliers couldn’t keep pace with the Tigers.

’16 Jack Richardson (Connetquot) tossed out an assist, picked up a ground ball and caused a turnover as the Big Green beat the Bulldogs for the first time in program history.

’16 Vin Lombardi (Bayport-Blue Point) knocked out a caused turnover and snared two ground balls as the Falcons flew past the Bonnies.

’17 Kevin Mack (Manhasset) stung five goals to go with three ground balls and a caused turnover to topple Canisius, and he also added a goal against the Warriors.

’18 Ethan Rall (Islip) caused a turnover and won a faceoff for the Scarlet Knights.

’16 Casey Kimmel (Massapequa) caused a turnover for the Hawks.

1️⃣0️⃣ points in your first career college game is good, right? ‘19 🍊 Blake Behlen (Commack) tossed out seven 🍎 to go with a 🎩 trick in his @farmingdalestatelacrosse debut in a 20-3 W!

’19 Blake Behlen (Commack) wasted no time making an impression for the Rams, dropping seven assists to go with a hat trick, three ground balls and a caused turnover in Farmingdale State’s season opener. He followed it up with a goal and five helpers and three ground balls against FDU-Florham, while ’18 Jake Wandle (Rocky Point) buried five goals and added two assists in the second win. Wandle ripped home a hat trick against Mitchell and also added an assist, two ground balls and a caused turnover.

’18 Rob Varello (Smithtown East) had four goals, two assists and a caused turnover against Mitchell and followed it up with two goals, a helper and a pair of ground balls.

’18 Matt Sageder (Mount Sinai) stopped five second-half shots and added a pair of ground balls to help the defending national champions win a battle of two of top-15 teams in the country.

’18 Sean Baudo (St. Anthony’s) fired home his second goal of the game 3:05 into overtime to cement Catholic’s first victory of the season. Baudo also added a caused turnover in the win and had a goal earlier in the week against Hampden-Sydney.