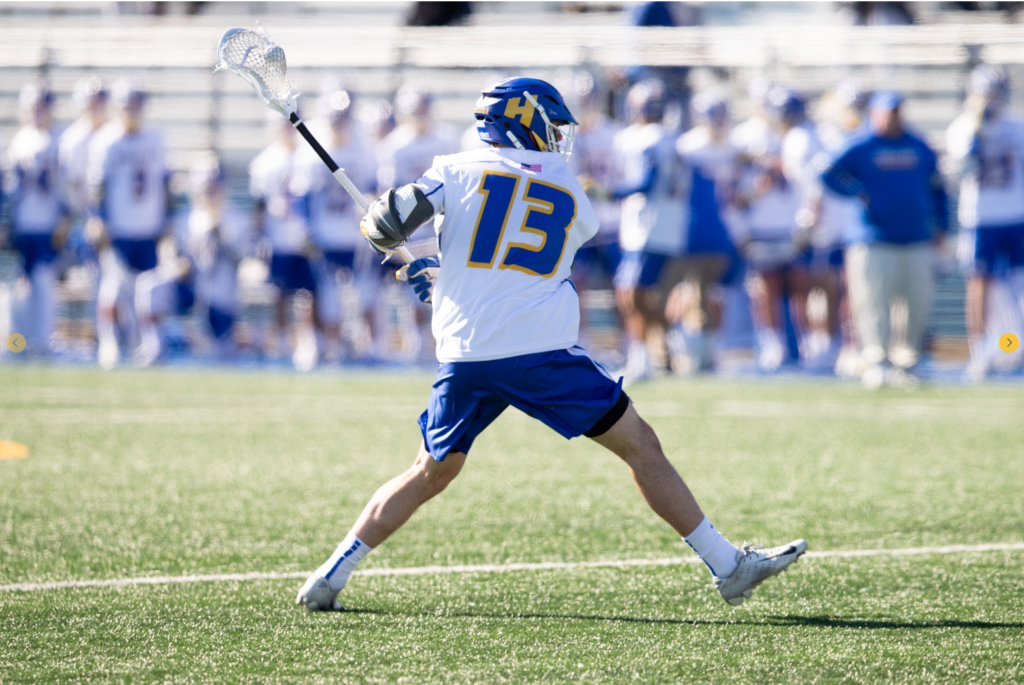 If you don’t know about Ryan Tierney, it’s time to sit down and learn all about him.

The Team 91 2016 alum by way of Massapequa, a first-team All-CAA selection for the past two seasons, is one of the more under-the-radar attackmen in the country, but that shouldn’t last much longer. Saturday, Tierney toasted visiting Michigan for eight points on the strength of four goals and four assists in a 12-9 Hofstra win.

Tierney had one of the best plays of anyone in the country with this ludicrous skip pass to teammate Dylan McIntosh for a goal.

This skip pass from 91 ‘16 alum Ryan Tierney (Massapequa) is illegal in 23 countries and 42 of 50 states. Absolutely outrageous. 🎞: @hofstramlax

’16 Bobby Casey (Wantagh) denied eight shots to secure the Pride’s win. ’16 Riley Forte (Half Hollow Hills West) picked up an assist for the hosts. ’17 Kevin Mack (Manhasset) scored once for the Wolverines.

’17 Joseph Bartolotto III (Miller Place) was a wrecking ball for the Big Red, taking the ball away four times to go with four ground balls, and ’19 Angelo Petrakis (Massapequa) opened his Cornell career by winning six of 10 faceoffs to go with three ground balls and his first career goal.

’17 Steve Ramirez (Lindenhurst) countered with a goal for the Great Danes.

CAPUTO. HAT TRICK.@owen_caputo getting in on the fun, scoring his third to make it a four goal lead with time winding down 🙌

’18 Owen Caputo (Middle Creek, N.C.) had the finest game of his young career, burning the Pios for a hat trick and three assists as Duke won a battle of top-10 teams.

’18 Jordan Ginder (Brunswick, Conn.) was a force at the faceoff X for the Blue Devils, coming away with 18 of 28 faceoffs and picking up six ground balls, while ’19 Kenny Brower (Massapequa) corralled three ground balls. ’17 Cameron Mulé (Half Hollow Hills West) sniped a goal and ’19 Connor Drake (Salisbury) picked up a ground ball in the win.

’16 Lucas Cotler (Syosset) was unstoppable for the Bulldogs, tossing in four goals to go with an assist, two ground balls and . a caused turnover as Yale opened the season with an impressive win. ’17 Luke Eschbach (Smithtown East) and ’18 Sean Kuttin (Chaminade) each grabbed a ground ball for Yale.

’17 Taylor Strough (Cold Spring Harbor) got buckets all day for the Stags, torching the Seawolves for five goals and a pair of ground balls, to lead Fairfield to a season-opening win. ’18 Anthony Palma (Islip) stopped a shot in relief for Stony Brook.

As he tends to do, ’16 Mac O’Keefe (Syosset) ran the, “score a goal,” play early and often, finishing with six goals, a pair of ground balls and a caused turnover in another easy Nittany Lions win.

’17 Matt Tufano (Glenn) supplied a goal for the Hawks,

’16 Justin Lynskey (Massapequa) snapped home a hat trick, including the last one that held up as the game-winner, as the Crusaders edged the Catamounts.

GOAL HOOS!! Laviano scores and Kraus records his 100th career assist!! He is the 4th Cavalier and 10th ACC player ever to record 100 goals and 100 assists in his career!! Hoos lead 8-4!! #GoHoos @ACCMLax

’17 Ian Laviano (Cold Spring Harbor) scored once to go with a caused turnover as the defending national champs toppled Lehigh.

’19 Christian Mulé (Half Hollow Hills West) paired a goal with an assist and three ground balls for the Mountain Hawks, ’18 Anthony Tangredi (Chaminade) caused a pair of turnovers to go with two ground balls and ’19 John Sidorski (East Islip) picked up a trio of ground balls in the loss.

’16 Jack Richardson (Connetquot) helped the Big Green kick off its season in style with two ground balls and a caused turnover.

’17 Joe LiCalzi (South Side) gobbled up a ground ball and helped the Hoyas’ defense slow down UMBC’s offense in the win. ’17 Tommy Lingner (St. Anthony’s) denied a baker’s dozen shots for the Retrievers.

’17 Ryan Magnuson (Northport) set up a goal as the Mids rolled.

’17 Sean Lulley (Half Hollow Hills East) put the Quakers on his back and nearly lifted them to a win with a four-goal, two-assist, three-ground ball day.

’16 Jake Weinman (Bayport-Blue Point) orchestrated much of the Red Foxes’ offense with a quartet of goals to go with a ground ball, but Marist couldn’t quite pull off the upset.

’16 Casey Kimmel (Massapequa) strung together a goal and an assist for the Hawks.

’19 Nick Cannetti (Sayville) put the clamps down from his SSDM spot with a pair of caused turnovers to go with two ground balls as the Panthers found the win column for the first time.

’18 Matt Sageder (Mount Sinai) made his first save in a Cabrini uniform as the defending national champs rolled in their opener.

’18 Sean Baudo (St. Anthony’s) pocketed a goal and two assists in the overtime loss to Randolph-Macon after burying his first goal of the season in Catholic’s opener.