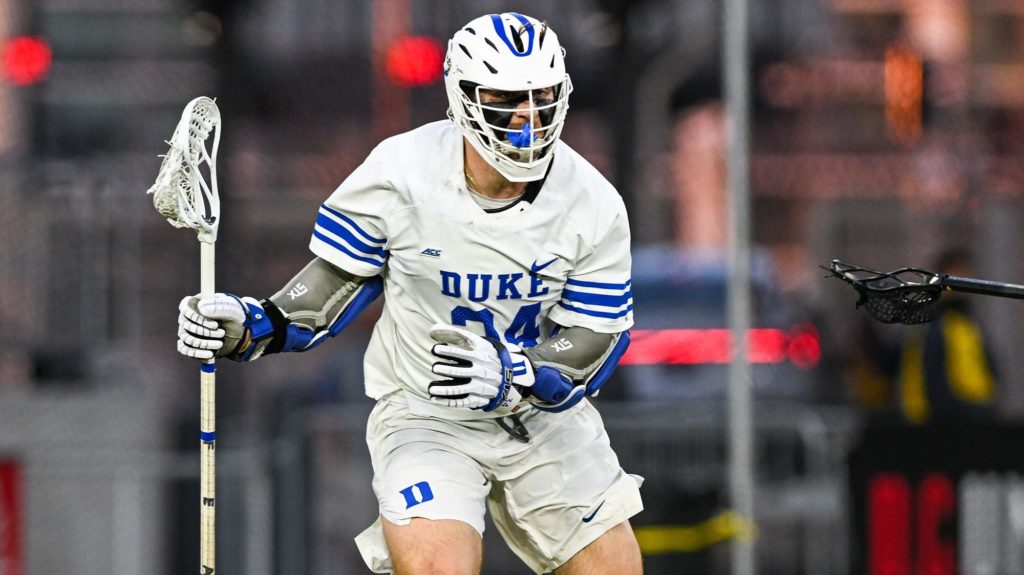 Still a problem for defenses. Photo courtesy of Duke Lacrosse.

Maybe counting Duke out was a mistake.

The Blue Devils looked very much the part of a title contender last week. Team 91 2020 Crush and St. Anthony’s product Brennan O’Neill was at the forefront of a 17-8 rout of two-time defending national champion Virginia. O’Neill fired home four goals and dished out four assists, leaving him one goal shy of the 50-goal mark for the season, to lead an explosive Duke offense.

’19 Orange Angelo Petrakis (Massapequa) won 17 of 33 faceoffs and scooped up eight ground balls to help the Big Red upend the Orange in overtime. Petrakis and ’21 Blaze Danny Caddigan (Smithtown West) teamed up to win the overtime faceoff for Cornell, too. Caddigan also buried a goal for Cornell, while ’17 LSM Joe Bartolotto (Miller Place) scooped up a ground ball.

Bartolotto caused a pair of turnovers against the Black Knights, while Petrakis won five faceoffs and added a pair of ground balls.

’20 Crush defenseman Nick Caccamo (Harborfields) caused two turnovers and snapped up three ground balls for Syracuse against Cornell, then followed it up with four ground balls and a caused turnover against the Tar Heels. ’20 Crush Tyler Cordes (Connetquot) dished out a pair of assists against the Big Red before adding a ground ball against UNC.

’19 Orange Larry Cangro (Eastport-South Manor) knocked out a trio of turnovers to help the Red Foxes take the Jaspers down.

’17 Taylor Strough (Cold Spring Harbor) led the Stags’ offense by handing out a trio of assists to go with a goal and a ground ball.

’19 Orange Justin Brown (Half Hollow Hills West) continued his strong campaign with two goals, an assist and a ground ball.

’20 Crush Brett Martin (Half Hollow Hills East) picked up a ground ball to help the Blue Jays get back into the win column.

’20 Crush defenseman Nick LiCalzi (South Side) grabbed a trio of ground balls and took the ball away twice to lead a ferocious Midshipmen defensive effort.

’17 Tommy Lingner (St. Anthony’s) was phenomenal in the cage yet again for UMBC, stopping a baker’s dozen shots sent his way and adding a ground ball in the process.

’19 Orange LSM Greg Campisi (St. Anthony’s) was a force for the Crimson, grabbing four ground balls, tallying once and causing a turnover.

’19 White Jared Paquette (West Islip) did everything he could for the Bulldogs, tossing aside 15 shots and grabbing three ground balls. ’19 Orange defenseman Mikey Alexander (West Islip) had a caused turnover and grabbed a ground ball for Yale, while ’21 Blaze Machado Rodriguez (Chaminade) won his lone faceoff and collected a ground ball.

’19 Orange Sam Lutfi (Massapequa) paced the Pride with a goal, an assist and a ground ball.

’19 White Nick Cannetti (Sayville) combined for three ground balls to help the Panthers to their fifth and sixth wins in the past seven outings.

’20 Orange Colby Suglia (Mattituck) vacuumed up five ground balls and caused a turnover in Queens’ opener. He followed up by bagging a trio of ground balls in Queens’ rout.

’18 Jake Sexton (Chaminade) led the Cardinals’ 20-piece with four goals, three helpers, two ground balls and a caused turnover. He was great again against the Jumbos, finishing with three goals, one assist and five ground balls.

’19 Will Puccio (Garden City) did all he could to keep Trinity in it with four goals of his own.

’21 Blaze Ryan Baudo (St. Anthony’s) jumpstarted the WestConn rout of their in-state rivals with a goal and three assists, while ’17 Jac Cutillo (Kings Park) doled out an assist. Cutillo then chipped in a ground ball in the win over Southern Maine.

’19 White Michael Carere (Connetquot) won all five faceoffs that he took against Mt. St. Vincent, while also supplying a goal, an assist and three ground balls in the process. He was a dominant 13-for-17 against Maritime and also collected nine ground balls.

’17 LSM Stephen Ketelsen (Hicksville) scooped up a ground ball in RIT’s rout. ’18 defenseman Conor Caiazza (Half Hollow Hills East) caused a turnover for the Bombers against RIT. He then helped Ithaca back into the win column with a tremendous two-caused turnover, three-ground ball day.

’21 Ambush Andrew Tittmann (Northport) was brilliant in goal for the Lions, stopping 16 shots and scooping up two ground balls.