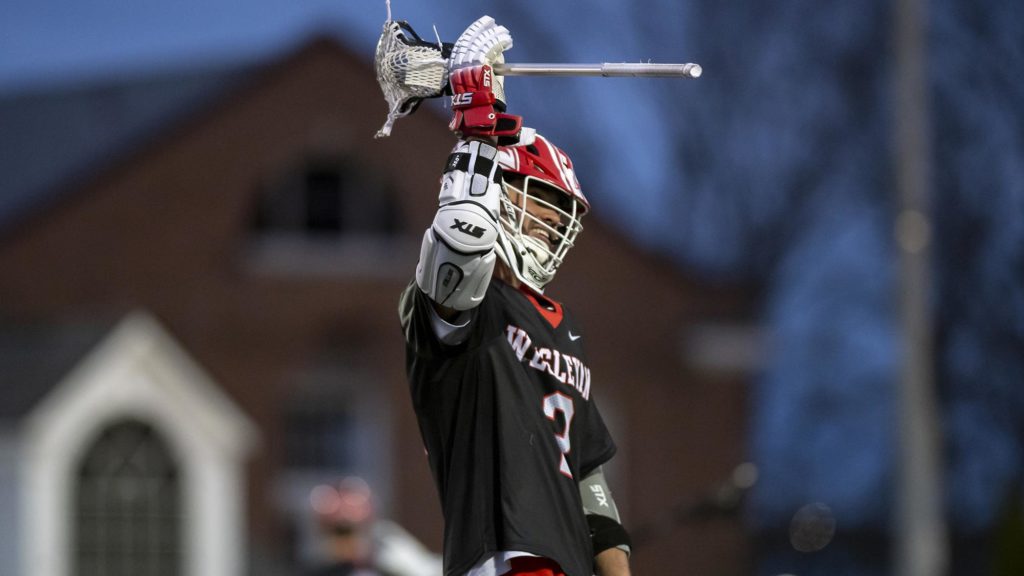 What a week it was for Jake Sexton and Wesleyan.

Sexton, a Team 91 2018 product by way of Chaminade, posted five goals and five assists to help the Cardinals knock off a pair of ranked NESCAC rivals in Amherst and Middlebury.

Sexton put forth a three-goal, four-assist, two-ground ball, one-caused turnover performance in Wesleyan’s 21-14 rout of Amherst. He followed it up with two goals and a helper, as well as a caused turnover, as the Cardinals nipped Middlebury 12-11.

Sexton has been a force for Wesleyan all season long, tallying 27 goals, 21 assists and 48 points. All three totals are good for second on the Cardinals, who hold an 8-2 record.

’17 Sean Baudo (St. Anthony’s) led the way for the Cardinals with five goals, an assist, two ground balls and a caused turnover.

’19 White Michael Carere (Connetquot) won four faceoffs and set up a goal for the Golden Eagles.

’17 Jac Cutillo (Kings Park) and ’21 Blaze Ryan Baudo (St. Anthony’s) each paired two assists with a goal against St. Joseph. Cutillo then followed it up with two goals, a helper and a ground ball against Plymouth State. Baudo chipped in a goal, a ground ball and two caused turnovers.

’19 Connor Buschle (St. John The Baptist) helped spark the rout with a goal, two ground balls and a faceoff win.

’19 White Kyle Craig (Wantagh) caused a turnover and collected three ground balls as F&M mounted a furious comeback to get the win.

’19 White Will Puccio (Garden City) snared three ground balls for the Bantams in their week’s opener, then followed it up with a hat trick for Trinity.

’21 Ambush Aidan Bonn (Huntington) engulfed a trio of ground balls in both games for FDU.

’19 Orange Angelo Petrakis (Massapequa) won 17 of 27 faceoffs and scooped up nine ground balls to spur the Big Red past the Crimson.

’17 LSM Joe Bartolotto III (Miller Place) bagged a pair of ground balls and caused a turnover for Cornell, which also got a goal and a ground ball from ’21 Blaze Danny Caddigan (Smithtown West).

Mack then buried a hat trick against NJIT, while Palma made four saves and added a ground ball in split duty to secure the win. Giovinco tallied once, while Reda caused a turnover and grabbed a ground ball.

Goal number 20 for the Bulldogs comes from senior Luke Eschbach! It's the fifth man-up goal for Yale.

’19 White defenseman Alex Keener (Bethpage) helped the Hawks to a win with two ground balls and a caused turnover.

4 goals on 5 shots so far for the sophomore

’19 Orange Justin Brown (Half Hollow Hills West) almost put the Wolverines over the top by himself with an insane five-goal performance on just six shots. He also chipped in a ground ball.

’20 Crush defenseman Nick Caccamo (Harborfields) was a force for the Orange with two caused turnovers and four ground balls.

’20 Crush defenseman Nick LiCalzi (South Side) swatted away three turnovers and picked up two ground balls for the Midshipmen.

’21 Blaze LSM Tyler Schwarz (Shoreham-Wading River) took the ball away once while also gobbling up a ground ball for the Tar Heels.

’20 Crush defenseman Trevor Marsala (Mount Sinai) took the ball away once and snagged a pair of ground balls for the Saints.

’19 Orange defenseman Larry Cangro (Eastport-South Manor) caused a turnover and scooped up a ground ball for the Red Foxes.