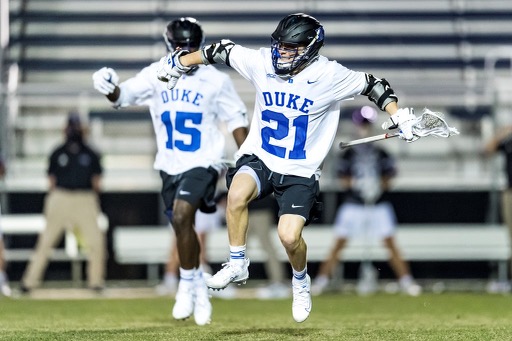 The Team 91 2017 and Half Hollow Hills West spearheaded Duke‘s incredible 27-8 rout over High Point with his first career hat trick and then chipped in another goal as the Blue Devils hammered Jacksonville, 17-6. The senior has already established a career high in goals with markers in four of Duke’s eight games.

’20 Crush Brennan O’Neill (St. Anthony’s) paced the Blue Devils with a pair of five-goal games to spur a 44-goal week for Duke. ’19 Orange Kenny Brower (Massapequa) led a defense that didn’t yield double-digit goals to either opponent and snatched up three ground balls. ’19 Orange Tyler Carpenter (Salisbury, Conn.) continued to wreak havoc from his LSM spot, collecting a total of nine ground balls and causing a trio of turnovers.

’19 Orange John Sidorski (East Islip) paced a high-flying Mountain Hawk squad with a goal and three assists, ’18 Extreme Anthony Tangredi (Chaminade) took the ball away from the Bison three times to go with two ground balls and ’19 Orange Christian Mulé (Half Hollow Hills West) had a goal, an assist and two ground balls as Lehigh cruised.

’19 White defenseman Alex Keener (Bethpage) tossed in his first career goal against Wagner while also collecting a pair of ground balls. ’16 Jack Zullo (Chaminade) made four saves in split duty against the Seahawks.

Better luck next time goalie. You arent stopping this from one of the best shooters in the country@jhumenslacrosse 13, @PennStateMLAX 6 pic.twitter.com/jH0ZPUzMZn

’18 Extreme Anthony Palma (East Islip) tossed aside eight shots and grabbed two ground balls against the Orange and added seven more saves in the win over the Highlanders.

’17 Taylor Strough (Cold Spring Harbor) had a pair of two-goal games to pace the Stags while also adding a ground ball vs. UMass.

’19 Orange Blake Behlen (Commack) dished out two helpers to go with a goal and a ground ball as the Sharks picked up their third straight win.

’20 Crush Trevor Marsala (Mount Sinai) made the most of his first collegiate start, taking the ball away twice and grabbing four ground balls for the Saints.

’17 Ian Laviano (Cold Spring Harbor) put up an assist, a ground ball and a caused turnover for the ‘Hoos.

’19 Orange Kyle Munson (Calhoun) made a save in a relief performance for the Dragons.

’20 Orange Ronnie Durante (Lindenhurst) made his first collegiate save in relief for the Johnnies.

’19 White Marc Cottage (Smithtown West) buried his first career goal to go along with a caused turnover  in Wingate’s rout.

’20 Orange Colby Suglia (Mattituck) picked up a ground ball as Queens picked up its third win in the past four games.