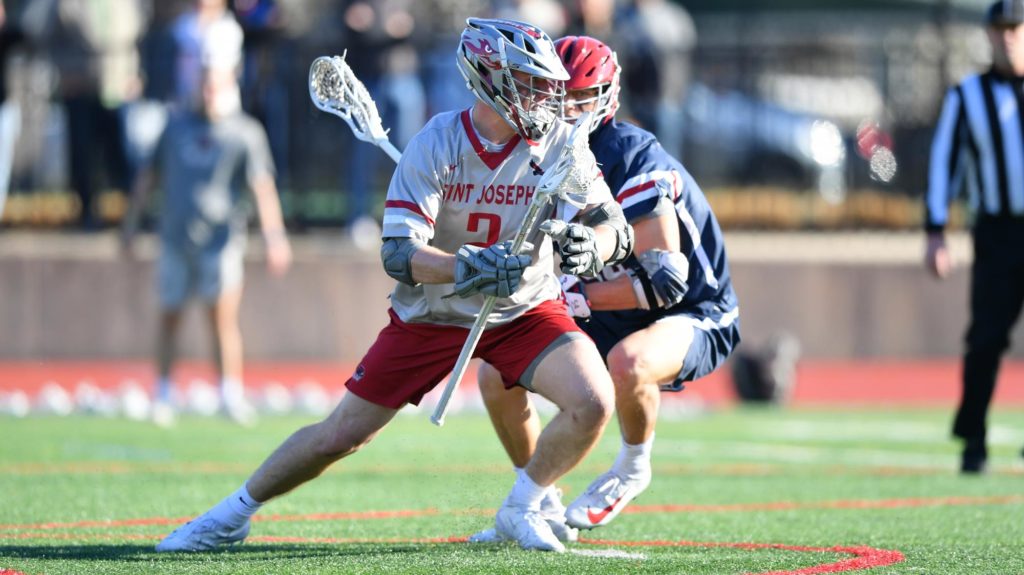 Ryan Doran picked the perfect time to come through in the clutch.

The Team 91 2018 product by way of Half Hollow Hills East broke a tie when he scored with seven minutes to play for what stood as the game-winning goal as Saint Joseph’s upended Merrimack, 9-7.

Doran also had two assists, two caused turnovers and a ground ball for the Hawks, who collected their third consecutive win. ’17 Matt Tufano (Glenn) bolstered the SJU offense with two goals, three assists and a ground ball, including a helper on the game-icing goal with less than three minutes to play.

’16 Mac O’Keefe (Syosset) eclipsed the 200-goal plateau for his career with a hat trick to go with an assist and a ground ball, but the Wolverines got two ground balls from ’19 Orange Justin Brown (Half Hollow Hills West) to pick up their first win of the season.

’17 Tom Galgano (Bethpage) did his best to keep the Bearcats in it with a whopping four caused turnovers and a ground ball. ’17 Kyle Tiernan (Glenn) had two ground balls and a caused turnover, ’18 Extreme Max Verch (Syosset) knocked loose one turnover and ’20 Orange Trey Sofield (Oceanside) scooped up a ground ball.

Cotler picks up a good screen from his former Yale teammate, and pushes our lead to 5-2#PioneerTogether pic.twitter.com/tmMow08lBg

’18 Extreme Ethan Rall (Islip) continued his great start to the season with a pair of ground balls and a caused turnover to get the Scarlet Knights back into the win column.

’17 Tommy Lingner (St. Anthony’s) was his usual stout self in the Retrievers’ cage, denying 10 rips sent his way and adding a caused turnover and a ground ball to help his cause.

’19 Orange‘s Blake Behlen (Commack) pocketed a pair of goals and set up another, to go with two ground balls and a caused turnover, to pace the Sharks to their fourth straight win.

’18 Extreme Anthony Palma (East Islip) tossed aside nine shots and added a ground ball to lead the Seawolves to their second win in a row.

’17 Taylor Strough (Cold Spring Harbor) dished out an assist as the Stags rolled to the win.

’18 James Amorosana (Manhasset) gobbled up a ground ball for Marquette.

’19 White Billy Gordon (St. Anthony’s) was a force all over the field for the Chargers, pairing two goals with an assist to go along with five ground balls and a caused turnover.

’19 White Marc Cottage (Smithtown West) twice found the back of the net and dished out an assist as Wingate hit 20 goals for the fourth time this season.

The Rams rolled to a season-opening win in style thanks to ’18 Extreme‘s Jake Wandle‘s (Rocky Point) five-goal, two-assist day. Wandle only needed five shots to get his goals, too.

’18 Conor Caiazza (Half Hollow Hills East) was a force for the Bombers, causing two turnovers, snaring three ground balls and chipping in an assist to secure Ithaca’s win in its season opener.

’18 Extreme Matt Sageder (Mount Sinai) did everything he could to keep the Cavaliers in the game by putting forth a ridiculous 24-save day to go with four ground balls.

’20 Orange Matt Warns (Mattituck) scooped up five ground balls and caused a turnover in Wilkes’ weekly opener, but it was his goal and three ground balls against King’s that helped Wilkes to its first win of the season.