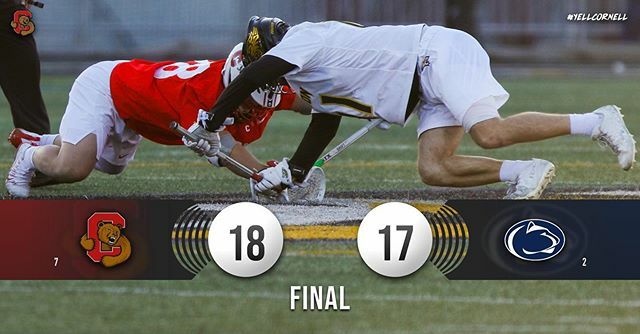 What a time to score your first collegiate game-winner, Angelo Petrakis.

The Team 91 2019 Orange faceoff midfielder and Cornell freshman was the talk of the Crown Lacrosse Classic as he took a long feed off of a faceoff win in the game’s dying seconds, outran everyone and ripped home a bouncer for his second goal of the game as the Big Red topped Penn State, 18-17, in a battle of two of the country’s top 10 teams.

Petrakis was also a beast at the faceoff X, where he claimed 18 of 29 battles to go along with five ground balls against one of the nation’s top faceoff units – including seven of 10 in the first quarter as Cornell opened up an 8-2 lead – to help Cornell stay unbeaten. The Massapequa alum has helped fix the Big Red’s faceoff woes by winning a robust 61.8 percent of his skirmishes.

’16 Mac O’Keefe (Syosset) temporarily gave the Nittany Lions the lead to erase Penn State’s nine-goal deficit when he finished his hat trick with 3:25 to play. O’Keefe also added an assist and a ground ball.

His first goal of the season and second of his career gets us into double digits!

’18 Jordan Ginder (Brunswick, Conn.) won 11 faceoffs and had a crucial goal for the Blue Devils, to go along with five ground balls, as Duke won its third straight and fifth out of six. ’19 Kenny Brower (Massapequa) knocked loose a pair of turnovers in the win, while ’19 Connor Drake (Salisbury, Conn.) dished out an assist and grabbed a ground ball.

’19 Pat O’Neill (Ward Melville) picked a great game to make his debut as he grabbed three ground balls to help the Bears down the defending national champions. ’17 Ian Laviano (Cold Spring Harbor) tucked home a pair of goals and grabbed a ground ball for the ‘Hoos.

Justin Tiernan is on the board with his first-career goal! Watch: https://t.co/lniVr0QZL5 pic.twitter.com/rURnLK2Lqj

’18 Anthony Tangredi (Chaminade) continued his remarkable season with a whopping five caused turnovers and three ground balls. ’16 Justin Lynskey (Massapequa) set up a Crusader goal and had a ground ball.

’16 Lucas Cotler (Syosset) turned in a pair of assists, while ’17 Luke Eschbach (Smithtown East) and ’18 Sean Kuttin (Chaminade) each had a ground ball as the Bulldogs ran away from the Wolverines.

’17 Kevin Mack (Manhasset) had an assists and a ground ball for Michigan.

’17 Tommy Lingner (St. Anthony’s) was stout yet again in the Retrievers’ cage, stopping seven shots to go with a ground ball against the Tigers and adding nine saves against the Panthers as UMBC picked up its third and fourth straight wins.

’17 Joe LiCalzi (South Side) pocketed a ground ball and caused a turnover as the Hoyas ran all over the Tigers to stay perfect at 6-0.

’17 Ryan Magnuson (Northport) helped the Mids nip the Raiders with a goal.

GOAL! Penn cashes in on a SJU turnover as Sean Lulley converts a feed from Adam Goldner! #AllinILPL | #FightOnPenn pic.twitter.com/ApGQDPmoFZ

’17 Sean Lulley (Half Hollow Hills East) continued to keep defenses looking for answers as he popped off for a goal, five assists, two caused turnovers and a ground ball against the Wildcats, then later added a goal, two helpers and two ground balls against the Hawks.

’17 Matt Tufano (Glenn) had an assist in the Hawks’ win over the Dragons before hitting Penn for two goals, two assists and two ground balls.

’16 Ryan Tierney (Massapequa) paced the Pride with a goal, a helper and a ground ball, ’16 Bobby Casey (Wantagh) stopped nine shots and ’19 Sam Lutfi (Massapequa) buried a goal for Hofstra.

’18 Ethan Rall (Islip) knocked out a pair of turnovers and snared a pair of ground balls for the Scarlet Knights.

’16 Casey Kimmel (Massapequa) was great off the ground with four ground balls for the Hawks.

’19 Nick Cannetti (Sayville) caused a turnover for the Panthers.

Six goals, six and 0. Robbie Varello goes off for six goals and one assist, Blake Behlen pops off for five and three and John McMahon scoops up 14 (!) ground balls in our win. Jake Wandle adds two goals and three 🍎.

The trio was even better against Hartwick as Behlen paired five goals with three assists to go with a ground ball and a caused turnover. Varello couldn’t be stopped offensively with six goals and an assist to go with five ground balls, and Wandle rounded out the win with two goals, three assists, five ground balls and a caused turnover as Farmingdale claimed its sixth straight to open the season.

’17 Rob Ziegler (Sayville) was a one-man wrecking crew for the Hawks with four caused turnovers and five ground balls before adding three ground balls against Bard.

’19 Van Parker (Broughton, N.C.) set up a pair of goals and scored once to fuel the Sea Gulls’ romp.

’17 Jensen Corabi (Half Hollow Hills West) dished out an assist as the Jumbos hammered their NESCAC rival by scoring 24 or more goals for the third straight game.

Sexton chipped in two goals, a helper and three ground balls against Western New England, while Martello fired home a hat trick to go with an assist.