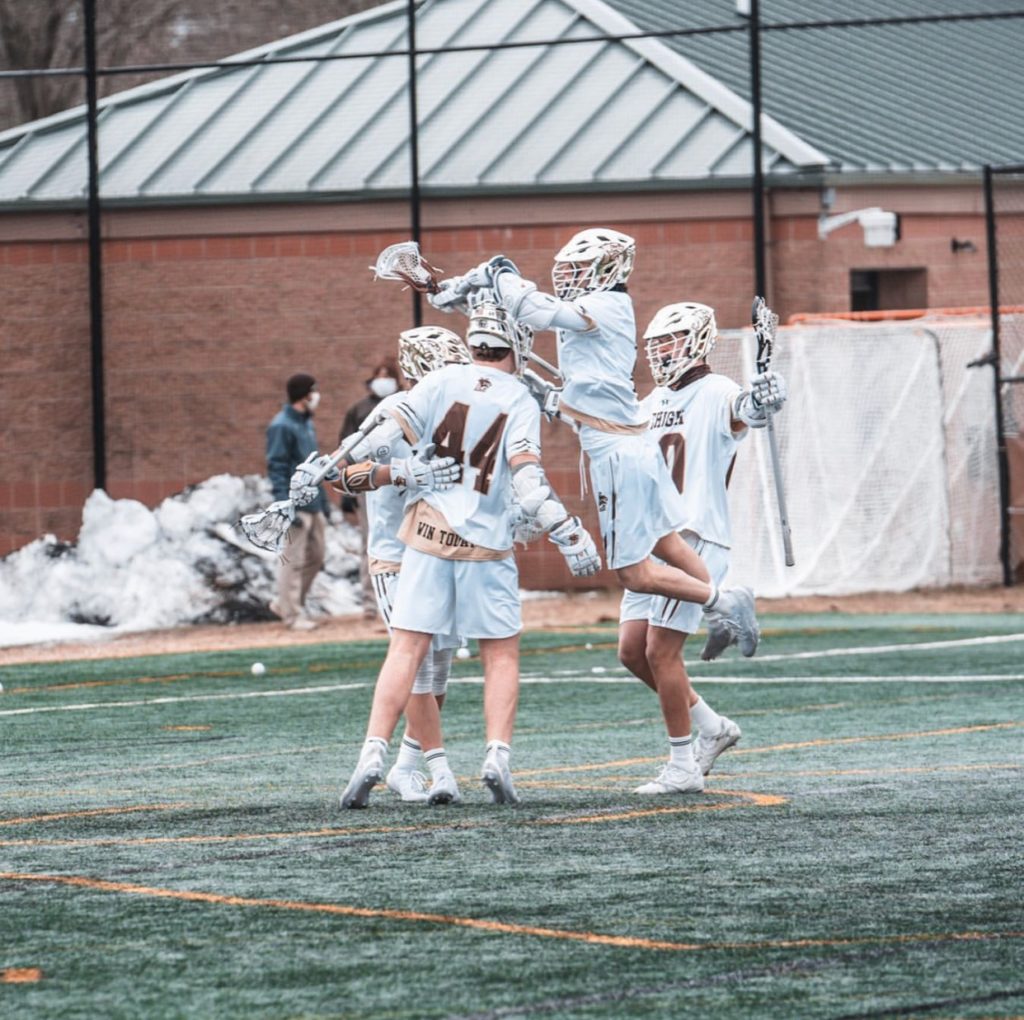 Justin Tiernan (44) and Christian Mulé (flying through the air) helped Lehigh to its first-ever win over Loyola.
Photo courtesy of Nick Ieradi.

Lehigh made some history this weekend, and some Team 91 stalwarts were in the midst of it all.

The goal that made Ryan Tierney the all-time leader for goals at #Hofstra and points at #CAALax❗#RoarWithPride pic.twitter.com/ZgY2CsBWjs

’16 Ryan Tierney (Massapequa) continued his relentless assault on the record books. This time, he put up six goals, which enabled him to become Hofstra’s all-time goals leader and the Colonial Athletic Association’s all-time points leader. The game was Tierney’s third of the season with at least six goals, and he’s second nationally in goals with 23 and first nationally in goals per game with a whopping 5.75.

’16 Justin Lynskey (Massapequa) paired two goals with two assists to go with four ground balls for the Pride, who won their third straight game. ’16 Logan Danenza (St. Anthony’s) had a ground ball to go with a caused turnover, ’19 Sam Lutfi (Massapequa) and ’16 Riley Forte (Half Hollow Hills West) each tacked on an assist

’16 Ian Laviano (Cold Spring Harbor) scored what stood as the game-winner and collected two ground balls as the ‘Hoos nipped High Point. Laviano also pocketed a goal in the win over the Falcons.

’18 Teddy McLoughlin (Islip) got in on the defensive fun with a three ground balls and a caused turnover. ’20 Orange Trey Sofield (Long Beach) claimed his first collegiate faceoff.

’17 Kevin Mack (Manhasset) had a ground ball for the Wolverines.

’16 Mac O’Keefe (Syosset) connected for a hat trick to spark the Nittany Lions past the Buckeyes. ’19 Orange Gerald Filardi (Half Hollow Hills West) snatched up a ground ball in the win.

’16 Lucas Cotler (Syosset) popped a pair of goals and also dislodged a pair of turnovers as the Pios rolled.

’17 Joe LiCalzi (South Side) got the Hoyas going in the rout of the Mount with an assist, a caused turnover and two ground balls before taking the ball away once against Marquette.

’19 Blake Behlen (Commack) buried his first Division I hat trick to go with two ground balls and a caused turnover to pace the Sharks to the win.

’17 Taylor Strough (Cold Spring Harbor) got his season started with a pair of hat tricks. He added an assist and two ground balls against the Friars before chipping in a ground ball against the Blue Hens.

’19 White Alex Keener (Bethpage) dislodged a pair of turnovers to go with two ground balls, ’16 Jack Zullo (Chaminade) made five stops and ’18 Ryan Doran (Half Hollow Hills East) scored once and added a ground ball for the Hawks.

’20 Crush Trevor Marsala (Mount Sinai) made his collegiate debut with a ground ball for the Saints.

’19 White Billy Gordon (St. Anthony’s) collected a pair of ground balls and tossed out an assist for the Chargers.