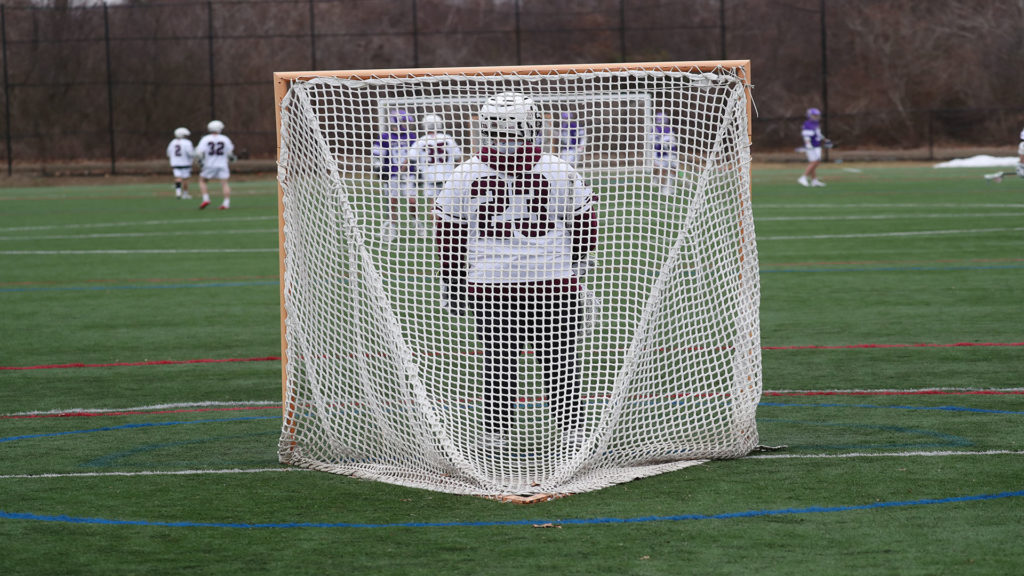 Christian Michaels was in a zone for Molloy, to say the least.

The Team 91 2019 Orange goalie was fantastic in the cage for the Lions, stopping a career-high 24 shots in Molloy’s 9-8 double-overtime win over Roberts Wesleyan.

’17 defenseman Tom Galgano (Bethpage) took the ball away once and gobbled up three ground balls in the win.

’19 White Nick Cannetti (Sayville) dislodged a turnover and picked up two ground balls for the Panthers.

The win earned Brown a share of the Ivy League title, and the Bears will host this weekend’s Ivy League tournament. Sweeney also scooped up a trio of ground balls for Brown, which won its fifth straight game.

’20 Crush Brennan O’Neill (St. Anthony’s) doled out four assists to go with a goal and two assists as the Blue Devils swept their Tobacco Road rivals.

’17 Sean Lulley (Half Hollow Hills East) scored twice and set up another goal, while ’18 Extreme Owen Caputo (Middle Creek, N.C.) added a goal and an assist. ’20 Crush Aidan Danenza (St. Anthony’s) rounded out the scoring with an assist.

’19 White Jared Paquette (West Islip) stopped a dozen shots, picked up four ground balls and caused a turnover as the Bulldogs edged their rivals in overtime to claim a share of the Ivy League championship.

’19 Orange Angelo Petrakis (Massapequa) won 18 of 35 faceoffs and collected 13 ground balls in the process to lead the Big Red to a share of the Ivy title. ’17 LSM Joe Bartolotto III (Miller Place) grabbed a ground ball in the win.

Navy leads Bucknell 2-0 with 12:06 left in the first half. Henry Tolker and Xavier Arline with goals for Navy. Max Hewitt and Ryan Chase with assists. pic.twitter.com/NGG0x91UTS

’20 Crush Xavier Arline (Shoreham-Wading River) tallied once and grabbed a ground ball to lead the Mids over the Bison. ’20 Crush defenseman Nick LiCalzi (South Side) racked up a pair of ground balls on the defensive end.

’19 Orange Blake Behlen (Commack) paired two goals with three assists and a ground ball as the Sharks ate up the Pioneers.

’19 Orange Sam Lutfi (Massapequa) dished out an assist and grabbed a ground ball for the Pride.

’20 Crush LSM Chris Bardak (St. Anthony’s) caused a turnover and racked up a quartet of ground balls to push the Falcons past the Knights.

’18 Extreme LSM Max Verch (Syosset) picked up four ground balls to go with a caused turnover, ’21 Blaze Matt Keegan (Sachem North) dished out an assist and picked up a ground ball and ’20 Orange Trey Sofield (Long Beach) caused a turnover for the Bearcats.

’17 Tommy Lingner (St. Anthony’s) earned the win with six saves before ceding the way to his understudy, ’20 Crush Jayson Tingue. The Bay Shore alum made the first two saves of his career

’21 Blaze Mason Oak (Comsewogue) made a half-dozen shots in a half of work for the Bobcats.

’20 Crush defenseman Nick Caccamo (Harborfields) was a force for the Orange with two caused turnovers and three ground balls, while ’20 Crush Tyler Cordes (Connetquot) snagged a ground ball for ‘Cuse.

’19 White defenseman Alex Keener (Bethpage) took away the ball once for the Hawks.

’17 Taylor Strough (Cold Spring Harbor) scored once, set up another, caused two turnovers and grabbed a pair of ground balls for the Stags.

’18 Jake Sexton (Chaminade) led the Cardinals to a NESCAC tournament opening-round win with three goals and two assists. Earlier in the week, Sexton hit the Camels for a goal, two helpers and three ground balls.

’17 Jac Cutillo (Kings Park) led WestConn against Keene State with three goals and an assist, while ’21 Blaze Ryan Baudo (St. Anthony’s) chipped in a goal. Baudo then led the offensive onslaught against Salem State with two goals, three ground balls and a caused turnover, while Cutillo tacked on a goal.

The ’18 duo of Jake Wandle (Rocky Point) and Rob Varello (Smithtown East) each scored once against the Valiants. Wandle added a caused turnover and three ground balls.

Wandle then added a two-goal, three-assist, one-ground ball effort as the Rams pummeled Purchase in their regular-season finale.

If the ball was on the ground, ’19 White defenseman Kyle Craig (Wantagh) picked it up for the Diplomats. He came away with half a dozen ground balls as F&M won its regular-season finale.

’17 Sean Baudo (St. Anthony’s) followed up a two-assist, one-ground ball day against Salisbury with a hat trick and two ground balls as Catholic wrapped up the No. 1 seed in the Landmark tournament.

’19 White Will Puccio (Garden City) tallied twice in the Bantams’ win and followed it up with two goals, an assist and two ground balls against Amherst.

’21 Ambush Aidan Bonn (Huntington) had a career day for FDU in its win. He caused a career-best six turnovers, including two in the fourth quarter, and collected five ground balls in the win. It came on the heels of a three-ground ball day against Del Val.

’19 White Michael Carere (Connetquot) scored once and won 11 of 13 faceoffs for St. Joseph’s.

’20 defenseman Nick Cacciola (Shoreham-Wading River) harnessed a pair of ground balls and took the ball away once for the Hawks.