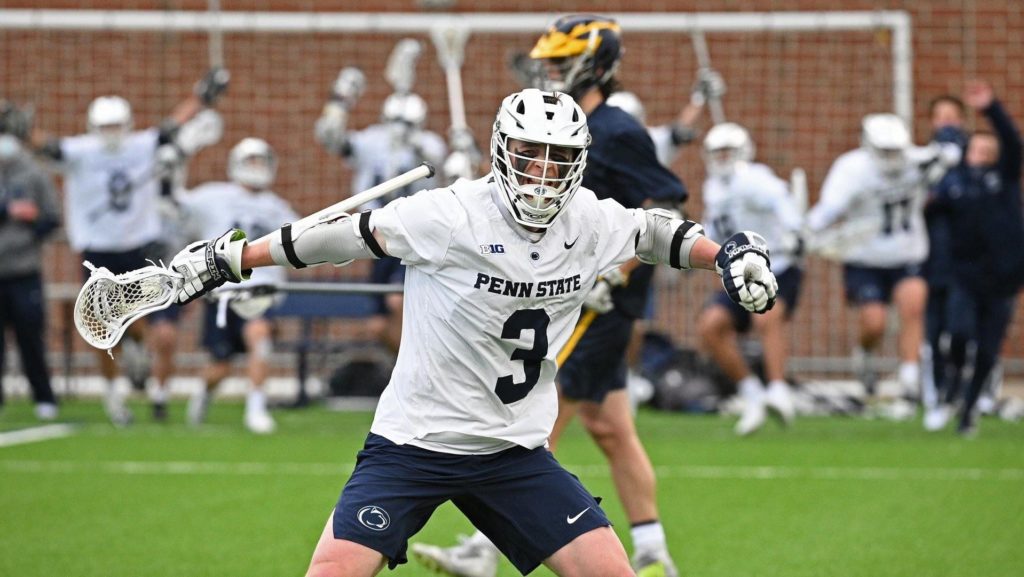 The Team 91 2016 and Syosset alumnus went into Friday’s game vs. Michigan needing two goals to break the Division I all-time career goals record. He got that – and then some.

MAC O’KEEFE WINS IT FOR @PennStateMLAX

O’Keefe sets the all-time goals record and ends the game with his sixth goal. pic.twitter.com/qP1Fe4Soxd

O’Keefe fired home six goals for Penn State, including the overtime game-winner, as Nittany Lions edged the Wolverines, 14-13. He also handed out a pair of assists and scooped up three ground balls in the win. He also needed 11 less games to reach the mark than previous record holder Justin Guterding did.

The record-breaking goal, the 213th of his illustrious career, came on a vicious low-to-high crank that rocked the net back. O’Keefe ended the game by taking a skip pass and zipping a low-to-low rip through the five-hole for the win.

Ryan Tierney gets the assist to Justin Lynskey, making him the #Hofstra all-time points leader❗#RoarWithPride pic.twitter.com/G2V6EgkgZo

’16 Ryan Tierney (Massapequa) also inscribed his name into the Hofstra record books – again – by scoring once and setting up fellow 91 ’16 Justin Lynskey (Massapequa) for a goal to give him the most points in Pride program history. The previous mark stood since 1955, and Tierney has at least three more games to give himself some distance from the record.

Tierney popped a hat trick against the Tigers to go along with an assist and three ground balls. Lynskey scored once, while ’18 Extreme Drew Martin (Half Hollow Hills East) won four faceoffs and picked two ground balls.

’17 Joe LiCalzi (South Side) collected a pair of ground balls and caused a turnover as the Hoyas upended the Pioneers in overtime.

’16 Lucas Cotler (Syosset) twice found the back of the net and added two ground balls for Denver.

Feed of the year?

’17 Ian Laviano (Cold Spring Harbor) chipped in an assist and two ground balls for the ‘Hoos.

Christian Mule' with the behind-the-back beauty in the first half of this one! pic.twitter.com/XmOf1Ye5Hi

’19 Orange Christian Mulé (Half Hollow Hills West) feasted on the Leopards, burning them for four goals and two assists in the first game and following it up with a hat trick, an assist, a caused turnover and a ground ball in the rematch.

The ’19 Orange duo of Justin Tiernan (Glenn) and John Sidorski (East Islip) each had a goal and an assist in the opener and both followed it up with a tally in the back half of the home and home. ’19 Orange Nick Turrini (Calhoun) caused a pair of turnovers in the second game.

’18 Extreme Anthony Palma (East Islip) led the Seawolves by making nine saves, while ’19 Orange Andrew Giovinco (Syosset) scored once to go with a ground ball. ’20 Crush Dane Reda (Mattituck) made his collegiate debut with a caused turnover and a ground ball for Stony Brook.

’18 Extreme Ethan Rall (Islip) was a menace all over the field for the Scarlet Knights, dishing out an assist, grabbing three ground balls and causing a turnover. ’20 Crush Brett Martin (Half Hollow Hills East) did great work as an SSDM for Hopkins, causing a turnover to go with two ground balls.

’19 Orange Blake Behlen (Commack) was great again for the Sharks, handing out four assists to go with two goals as LIU edged the Mount.

Lingner with the big stop on the EMO. Still 12-7 UBC pic.twitter.com/7rfuBAJ22H

’17 Tommy Lingner (St. Anthony’s) was a rock in the UMBC cage once again, denying a dozen rips sent his way and gobbling up three ground balls.

’20 Orange Jack McCarthy (Connetquot) recorded a pair of caused turnovers for his first multi-caused turnover game as a Hawk as Hartford cruised.

’18 Extreme James Amorosana (Manhasset) caused a turnover and grabbed a ground ball to help Marquette win in OT. ’16 Tom Martello (Chaminade) scored once and set up another for the Johnnies.

’16 Justin Napolitano (Sachem East) had two ground balls and ’16 Quintin McKenna (Harborfields) added an assist in the double overtime loss to Le Moyne. Napolitano, the All-American defenseman, scored once to go with two caused turnovers and four ground balls against Pace, while McKenna tossed out another assist.

’18 Extreme Matt Sageder (Mount Sinai) made four, two and one stops to help the Cavaliers roll to a three-win week.

’20 Orange Matt Warns (Mattituck) grabbed a whopping six ground balls and caused a turnover in the opener, then caused two turnovers, won a faceoff and picked up a ground ball.

’17 Charlie Ricottoni (Half Hollow Hills West) made a save in relief in both games.

’17 Stephen Ketelsen (Hicksville) fueled a stout RIT defense with a caused turnover as the Tigers rolled.

’18 Conor Caiazza (Half Hollow Hills East) picked up a ground ball for the Bombers.

’19 White Max Albanese (West Islip) supplied the bulk of the Vassar offense with two goals and a helper to go with a caused turnover.